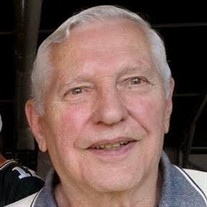 Jim Radke, 87, of Green Bay passed away on Sunday, June 13, 2021. Jim was born in Sheboygan, WI on October 5, 1933, the youngest child of Arthur A. and Meta L. (Schulz) Radke. After graduating from Sheboygan North High School in 1952, Jim attended Valparaiso University for two years. He enlisted in the US Navy serving as an Aviation Electronics Technician operating airborne electronic equipment. While in Japan, his squadron (VP-6) flew patrols along North Korea, Russia, and China. After his discharge he attended the University of Wisconsin Madison Business School, graduating in 1960 with a Finance degree. Jim worked in the banking industry in Milwaukee, as well as a Real Estate Agent for Mobil Oil Company. He moved to Green Bay in 1970 where he became a Certified General Real Estate Appraiser. While in the Navy, Jim took flying lessons and received his Commercial pilots license, including multi-engine, helicopter, and flight instructor ratings. He owned a Cessna 180 for several years. He’d fly in to Sheboygan County Airport and take his nieces and nephews for a ride in his plane, along with other family members daring enough to go. Jim was a long-time member of the EAA, and supported the EAA Museum in Oshkosh. Jim played the bassoon and piano, and enjoyed listening to music of the Big Bands, and he was a chair donor to the Weidner Center in Green Bay. On April 13, 2016 he went on an Old Glory Honor Flight to Washington DC with WWII, Korean, and Vietnam veterans with his niece Cindy. Jim attended Green Bay Packer games for over fifty years, and was a fan of the Wisconsin Badgers, Milwaukee Brewers and Milwaukee Bucks. He was also a long-time season ticket holder of UW Green Bay Men’s basketball. He was preceded in death by his parents, brothers Merlin A. Radke and Arthur E. Radke, and sister Lois A. Fritsch. He is survived by nieces Cindy (Randall) Pfister, Green Bay, Beth (Ken) Sommerfeldt, Sheboygan, and Terri Radke, Sheboygan, as well as nephews Thomas Fritsch, Sheboygan, Arthur D. Radke, Sheboygan, and Jeffry Radke, Appleton. Per Jim’s request, there will be no visitation. Cards and expressions of sympathy may be sent to Simply Cremation, 243 North Broadway Avenue, Green Bay WI 54303. A memorial will be established in Jim’s name for the EAA Aviation Foundation.

Jim Radke, 87, of Green Bay passed away on Sunday, June 13, 2021. Jim was born in Sheboygan, WI on October 5, 1933, the youngest child of Arthur A. and Meta L. (Schulz) Radke. After graduating from Sheboygan North High School in 1952, Jim... View Obituary & Service Information

The family of James W. "Jim" Radke created this Life Tributes page to make it easy to share your memories.

Send flowers to the Radke family.