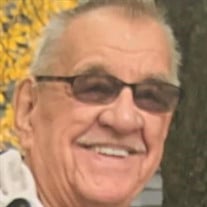 A fitting tribute the man ~ Jackie Charles Kobs Jackie (Jack) C. Kobs suddenly passed away, at his home, in the township of Freedom, Wisconsin, Saturday, January 23, 2021, at the age of 82. He was born February 17, 1938, in Appleton, son of Carl A. and Mary M. (Wagner) Kobs. Jack (Dad, Pop, Grandpa and Great-Grandpa) was a charismatic and loving man; the kind that if you knew him, you couldn’t help but love him! After graduating from Kimberly High School, he proudly served his nation for four years, in the U.S. Air Force. He trained at the United States Air Force Technical School in Wyoming, from September 1956 through June 1957, studying airplane and auto mechanics. He embodied being an apprentice who acquired and demonstrated knowledge of military customs, courtesies, traditions, and U.S. Air Force standards, while learning both military and technical skills. He was stationed in Reykjavík, Iceland, and then finished his military service in Montgomery, Alabama. Airman 1st Class Kobs received the Good Conduct Medal before being honorably discharged, in 1960. Jack married his adoring first wife Dorothy Hoover, September 25, 1959. They had three children: Jillian, Scott, and Charles. Jack and Dorothy were married, until her death June 24, 1997. January 10, 1998, Jack married his beloved second wife, Nancy L. Croisitiere. Jack welcomed Nancy’s children, Tammie Penney, Ron Hakenjos, Bill Langlois, and Nancy’s grandchildren as his own! He was a bighearted and doting husband, a loving and affirming dad, a fun and engaged grandfather and great-grandfather. Some of his favorite pastimes were sharing the dinner table, visiting, and playing the game Farkle with his family. When playing Farkle, he loved to say, “Just for the fun of it, let’s see what happens,” and he’d quickly put the dice in his dice cup and joyously slam it down shaking the table, all in good fun. He enjoyed going to his great-grandchildren’s birthday parties and chatting with everyone in attendance! His young great-grandson, Oliver, always wanted Grandpa Jack to sit by him at his birthday parties! Oliver repeatedly told anyone who’d listen, “Grandpa Jacks my favorite!” This tells you how beloved he was and how he will be fondly remembered! Jack assembled machine tools for Giddings & Lewis, in Kaukauna, for nearly 30 years, until the plant closed. Then, he worked for New London Engineering before retiring. Gardening, watching the Green Bay Packers’ games, watching TV, tending his yard and garden, and taking Mom shopping filled many of Jack’s days. In his earlier years, he enjoyed golfing in his employer’s gulf league. He knew how to be content in all situations, cheerful, and engaging. Jack will be fondly remembered for his joyous welcome, his infectious laugh, his warm smile, his love-filled affirmations, and irresistible and inviting hugs. He was an ever-ready conversationalist, who enjoyed sharing life with people of all ages, backgrounds, and opinions. He had a way about him that made the ones, with whom he was conversing, feel special. He valued and appreciated family and friends, and he was valued and appreciated by those who loved him. He will be missed by Nancy and their combined family of four children, nine grandchildren and nine great-grandchildren: Daughter’s family: Tammie (Michael) Penney, Menasha, WI, and their children: Chelsie (Eric) Linders and their daughter, NovaLee, Appleton, WI; and Calvin (Jessica) Penney, and their children, Klavin, Vaidyn, and Zailen, Appleton, WI Daughter’s family: Jillian (Steve) Weyenberg, Kaukauna, WI, and their sons: Dr. Matthew, (fiancée Jenny Bhatt), Chicago, IL; and Joshua Weyenberg, Kaukauna, WI Son’s family: Ron (Kim) Hakenjos, Black Creek, WI, and their son: Matthew (Alexandria) Hakenjos and their children, Violette and Oliver, Appleton, WI Son’s family: Scott (Teresa) Kobs, Houston, TX, and their children: Jessa (Jerrell) Loza, Houston, TX; and Jack LaFavre, Portland, OR Daughter-in-law’s family: Kelly Langlois, Appleton, WI; her children: Nick Wolff (Heather Berther) and their son, Hunter, Freedom, WI; and Kayla (Ben) Bigelbach, and their sons, Titan and Atlas, Neenah, WI Jack is further survived by two sisters-in-law and brothers-in-law: Carol (Danny) O’Neill, Beckley, WV, and their family; Cindy (Morey) Lang, Wallace, MI, and their family. Cousins, nieces and nephews, more relatives, and his dear and special friends: Flo, Gail and Henry. Jack was preceded in death by his parents; parents-in-law; infant son, Charles; first wife, Dorothy; Great-grandson Gabriel Hakenjos; Grandson Brandon LaFavre; Son Bill Langlois; Sisters Luella (Earl) Long and Viola Kobs; Brother-in-law Gary Utt; and Sister-in-law JoAnn Utt. Cremation services by Simply Cremation, Green Bay, WI. A small private Memorial Service will be held, when COVID-19 restrictions are lifted. In lieu of flowers, donations to go toward the final expenses and a memorial would be much appreciated. A very special thank you to those of his loving and thoughtful family and friends who regularly visited him, checked on and helped him with various responsibilities, chores and errands. Jack was well-loved and loved well. May God be glorified, as we remember Jack and the good times we shared. In Oliver’s words, “This should be a happy time. Grandpa Jack is with Jesus and has no more pain!” Jesus beckons, “Come to Me, all who are weary and heavily burdened, and I will give you rest [refreshing your soul with salvation]” (Matthew 11:28). “A thousand words won’t bring you back, I know, because I've tried, and neither will a thousand tears, I know, because I've cried” (https://immortalpoetry.com/Remembering).

A fitting tribute the man ~ Jackie Charles Kobs Jackie (Jack) C. Kobs suddenly passed away, at his home, in the township of Freedom, Wisconsin, Saturday, January 23, 2021, at the age of 82. He was born February 17, 1938, in Appleton, son of... View Obituary & Service Information

The family of Jackie (Jack) C. Kobs created this Life Tributes page to make it easy to share your memories.

Send flowers to the Kobs family.