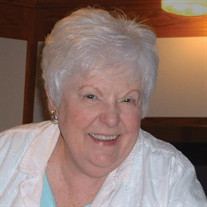 “Amazing” Grace Robinson Bouschart joined her hubby of 64 years in heaven on December 23rd. She was born to the late Allen Robinson & Grace Blindauer Robinson on April 27th, 1935, in Green Bay, WI. She attended St. John the Evangelist Grade School, East High School, and University of Wisconsin Madison. She married her best friend, Ken Bouschart on July 30th, 1955 when he was an engineering student at U.W. Madison. They moved to St. Paul, MN after graduation, then to Milwaukee, and back to Madison. They settled back in Green Bay in 1967, as they blossomed into fantastic parents of their six kids. Grace was a super volunteer at her kid’s schools, contributing in activities such as PTA, field trips, Music Parents Board, Athletic Booster Club, directing plays, musical make-up & backstage coordination, and just about anything else asked of her. She was a founding member of the Community of John the XXIII. She was also part of the religious education team at St. Jude, volunteering for the First Communion and Confirmation classes for 14 years. Besides her family, her big passion in life was music & theater. Along with volunteering in numerous high school, college and community productions, she also performed in St. Norbert’s Summer Theater, Harlequin & Community Theaters. Grace & Ken were original volunteers for the Weidner Center, and were thrilled to have the opportunity to meet many “stars” while working on costumes backstage. Although she always said she loved even more, meeting the up and coming theater students, and providing support for them. Grace had been a long time blood donor, and volunteer for the Red Cross for over 20 years. She & Ken volunteered for the local MS Walk since its inception, because of loving support for her dear sister-in-law. They were also huge supporters of the local Americanos Drum & Bugle Corp, volunteering with uniforms, food prep, driving/fixing the bus, and anything else needed. Grace & Ken were long time Packer season ticket holders, and UWGB women’s basketball. They also enjoyed attending Wisconsin Badger football games, including a Rose Bowl. They were lucky enough to attend a Super Bowl, and Grace was also at the “Ice Bowl”. (entire game!) They cherished greatly the opportunities they had to travel after finally sending their six kids off into the real world. Some of the great memories included New Mexico, Arizona, & California to visit her “Liz Lady” friends from college, along with Germany and Nova Scotia, to name a few. Grace is survived by her six outstanding children & their spouses. (her words) Brad & Susan Bouschart, Kingsport, TN, Lisa & Bill Tice, Fayetteville, AR, Jeff & Donna Bouschart, Phoenix, AZ, Amy & Frank Callea, Chicago, IL, Marty & Kim Bouschart, Green Bay, Becca & Rick Raymond, Appleton. Eight grandchildren; Brandon, Katie & Kenny Bouschart, Marty, Andy & Michael Tice, Dustin Wilhelme, and Ali Bouschart. Three great grandchildren; Rhett & Waylon Tice, and Hattie Grace Wilhelme. She is also survived by one sister, Joyce Miller, two brothers & spouses, Tom & Peach Robinson, Dan & Cindy Robinson, one sister-in-law June Robinson, and many wonderful nieces & nephews, who she loved as her own. She was proceeded in death by her beloved husband Kenny, her parents, brother Maurie Robinson, sister June Bongers, brothers-in-law Jerry Miller and Don Bongers. Also proceeded in death by her son Gerard who died at birth. It was Grace’s wish to donate her body to the University of Wisconsin Madison for research purposes, and has chosen not to have a funeral, but instead wanted her family and friends to gather to celebrate her life, share memories and smiles. If you know our Mom, you know that her given name could not have been more perfect. What pleased her more than anything was to see her family and friends smile, maybe not realizing how many of those smiles were because of her. A Celebration of Grace's life will be held on January 16th, from 4pm-7:30pm, at Rock Garden, 1951 Bond St., Green Bay. (Come to the Grand Ballroom North, entrance is on Northwest corner of building, door facing the highway. Sign above the door says “Grand Ballroom North”.) Please come for some food and drinks any time, and stay and visit with family. We would also like to thank the staff on 4th Floor of Bellin Hospital, and the compassionate folks at Unity’s Jack & Engrid Meng Hospice Residence. ********** “In honor of Grace, the family has set up a memorial fund, with funds being split between the American Red Cross, American Cancer Society, St. John’s Homeless Shelter, and MS Society” Checks can be written directly to any of these organizations, or to Marty Bouschart. All can be mailed to Marty Bouschart: 2237 Merganser Ct, Suamico, WI 54313. ********** Home Again, home again, jigidy jig!

The family of Grace Bouschart created this Life Tributes page to make it easy to share your memories.

Send flowers to the Bouschart family.