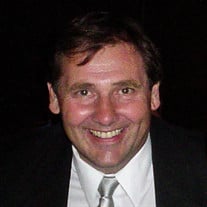 Gerard Anthony (Tony) Frank, 65, of Green Bay, passed away September 12, 2020, due to complications of heart disease. Born on February 18, 1955, in Port Washington, WI, he is the son of the late Harold and Audrey (Mitchell) Frank. He spent his childhood in Port Washington, Milwaukee, New Holstein, and Chilton, WI. He graduated from Chilton High School in 1973 and the University of Wisconsin-Stevens Point in 1978. He held numerous jobs during his life, including teaching, advertising, writing, doing inventories, and working at Kohl’s. Tony loved to read, spend time with his children and grandchildren, shop at thrift stores, listen to music and bike. He had a big heart and would do anything for his children and grandchildren. He had a calm and gentle disposition and his sense of humor was unmatched. He could make anyone laugh in his quiet, witty way. He is survived by his wife, Nancy; his children Nicolette (Charlie) Kopplin, Katherine (Daniel) Friesema, and Paul Frank (special friend Cecilia Stewart); his grandsons Walter, Nicholas, and Anthony Kopplin, Samuel and Franklin Friesema; his sisters Jane Roy and Ginny (Vern) Stuve; his brothers Mitchell (Wendy) and Darrell (special friend Teresa Trawitske), and many beloved nieces and nephews. He was preceded in death by his parents, Harold and Audrey Frank; his mother-in-law and father-in-law Kenneth J. and Sylvia Woelfel; his brothers, David, Gordy, and Wayne Frank; his brother-in-law Dale Roy; his sister-in-law Laurie Frank; his brother-in-law Kenneth P. Woelfel; his niece-in-law Sarah Frank; and his beloved golden retriever Madeline. A celebration of life will be held on Saturday, October 3, 2020 at Sepia Chapel, 3562 Finger Road, Green Bay, WI 54311, from 9AM until 11AM and a memorial service to follow, with Reverend Ginny Stuve presiding.

Gerard Anthony (Tony) Frank, 65, of Green Bay, passed away September 12, 2020, due to complications of heart disease. Born on February 18, 1955, in Port Washington, WI, he is the son of the late Harold and Audrey (Mitchell) Frank. He spent... View Obituary & Service Information

The family of Gerard (Tony) Frank created this Life Tributes page to make it easy to share your memories.

Send flowers to the Frank family.