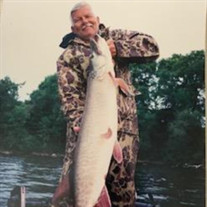 Gary Michael Hemm passed away January 7th, after a years long battle with Alzheimer’s. He was born August 20th, 1939, in Aurora, Illinois to Russell and Janet (Bergland) Hemm. He was baptized, confirmed and raised in the First Presbyterian Church in Aurora. At a very young age his Grandpa Bergland introduced him to fishing, which became a life long passion. He began working at the age of 12 cutting asparagus, mowing lawns, shoveling snow and delivering the newspaper. After graduating from Aurora East high school in 1957, he joined the army and served honorably for 3 years. His favorite tour of duty was serving in Seoul, South Korea as a photographer and Company Commander’s driver after the war had ended. He loved the people and the country, especially visits to the orphanages with his army pals to try and brighten the lives of the many kids. Their favorite thing, hula hoops! After returning home he enrolled in Aurora College, graduating with a major in history and a minor in business. He worked for Union Camp in Des Plaines, Illinois as a corrugated salesman for the next five years. Before college, he married Sharon Stark. They had two children; Charles William and Carrie Lynn. Gary and Sharon soon went their separate ways. In 1970 he married Rhonna Moffitt and began his 32 year career with Consolidated Papers in Wisconsin Rapids. Two years later their son Brandon Wesley was born. Three months after that Gary received full custody of Chuck and Carrie which made their family complete. They soon moved to Janesville, Wisconsin where they lived for 32 years. From 1989 to 1904 their son, Chuck, served 5 of his 20 year career in the U. S. Army in Seoul, South Korea where he met and married Moon Hee Kim. What a thrill for Gary and Rhonna to travel to Seoul for the Kids wedding. While there, Gary was able to revisit and relive his earlier years in a country that had changed dramatically in the last 35 years. He was even able to visit his old camp and see his photography lab and the Quonset hut he shared with his fellow soldiers. Also in 1991, while still living in Janesville the Hemm’s purchased a home in Algoma, Wisconsin one block from Lake Michigan where they spent weekends and vacations. Over the years their children and later their grandchildren came to visit Algoma as often as possible. Gary retired in 1998, and then worked as a consultant in the corrugated industry for a short time. In 2004, the Hemm’s sold their home in Janesville and move permanently to Algoma where they had made many friends and the fishing was abundant. Gary and Rhonna were fortunate to travel frequently for business and pleasure during their years together. Gary also fished in Canada, Costa Rica, Mexico, England, Ireland and Scotland among others, but his favorite was fishing the Mink River Estuary, which he read about in a book, “The 100 Best Places to Fish in the World”. Gary was thrilled that his three children and eight grandchildren all love to fish to this day. Many happy hours were spent on the waters of Lake Michigan and the bay of Green Bay making life long memories with them all. Gary is survived by his wife of 50 years, Rhonna (Ronni), their children Chuck and Moon Hee Hemm, Huntsville, Alabama; Carrie Owen, Pensacola, Florida and Brandon Hemm, Janesville, Wisconsin along with their eight grandchildren, Brandonn (Janelle) Hemm, Alesha (Trey) Campbell, Holly Owen, Kaylamarie Hemm, Korinne ( Chris Lundy) Hemm, Matthew Cramer, Kali and Fiona Hemm and four precious great grandchildren; Ashton, Brandonn, Kevin and Drake. In addition he is survived by his brother in law, Tom Moffitt; sister in law, Lynette Moffitt and special Aunt, Matriarch of the family, Norma Farley. He is further survived by Rhonna’s many nieces, nephews and cousins. He was preceded in death by his parents; mother and father in law, Everett and Debbie Moffitt and brother in law, Richard Moffitt. The family would like to thank our many friends and relatives who helped us through this journey with a special thank you to Lin and Butch Sherman for both their emotional and practical support. In the summer the family will scatter Gary’s ashes along with those of his favorite canine companion of 17 1/2 years, Kipper, in the Mink River leading out to Lake Michigan where he will fish forever. Anyone who wishes may make a donation in Gary’s name for the restoration of the boardwalk along the shore in Algoma, which they both loved so much, at www.friendsofcrescentbeach.org and follow the prompts.

Gary Michael Hemm passed away January 7th, after a years long battle with Alzheimer&#8217;s. He was born August 20th, 1939, in Aurora, Illinois to Russell and Janet (Bergland) Hemm. He was baptized, confirmed and raised in the First Presbyterian... View Obituary & Service Information

The family of Gary Michael Hemm created this Life Tributes page to make it easy to share your memories.