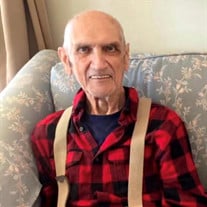 Franklin E. Wallace of Cecil, Wisconsin passed away Saturday, February 6th. He was 91 years young. He was born January 19, 1930 in Milwaukee to Edward and Louise (Karge) Wallace, attending Holy Redeemer School through the eighth grade. Growing up with 9 siblings, Franklin learned from an early age that "life is what you make of it," and passed that sentiment on to his wonderful wife of over 69 years, Patricia Yvonne (Zganjar) Wallace, their four children, seven grandchildren, and one great grandchild. Franklin married Patricia on July 21, 1951. He came home on Army leave for 10 days to say "I Do" to his bride, then returned to serve three years during the Korean War. When Franklin returned to civilian life, he worked as a carpenter at AJ Heinen in Milwaukee, then moved the family to Shawano Lake in 1972 to work for HJ Martin and Son in Green Bay until his retirement. He absolutely loved his career. Franklin's proudest life achievements revolved around his children and his strong Catholic faith. He was head of the men's club, served as an usher for many years at church, and became the first member of the Family of the Month by Knights of Columbus. Franklin helped start a food pantry and enjoyed driving the Amish around for many years – another virtue he passed on to his family of paying it forward. Franklin is survived by his loving wife; his children, Frank Jr (Angie Bistoff) of Cecil, WI; John (Ann) of Chicago, IL; William (Dawn) of Cape Coral, FL; and Yvonne Rabe (Steve) of Green Bay, WI; his grandchildren, Jeff, Ben, Roxanne, John Paul, Zach, Dana, and Andrew; his first great grandchild, Beckham; his brother, Bob (Pat); and his daughter-in-law, Deb Wallace. Franklin is preceded in death by his parents, his parents-in-law, 8 siblings, his niece Mary, and his nephew Gary. Franklin's family would like to extend a heartfelt thank you to the compassionate staff at Shawano Health Services and the hospice team for making Franklin's final days on earth comfortable and enjoyable. Visitation for Franklin will be held Friday, February 12th from 3-7pm at St. Martin of Tours Catholic Church in Cecil with a vigil at 6:30pm. A second visitation will be held on Saturday, February 13th from 9:30-11am with a mass to follow at 11am. Franklin's funeral broadcast will be available at the following link on Saturday, February 13th at 11am.     https://www.youtube.com/watch?v=lIZeNQLo7ek&feature=youtu.be We all know Frank is enjoying eternal casino time in Heaven with a great big smile on his face, drinking his Sun Drop, and listening to George Jones! We love you!

The family of Franklin E. Wallace created this Life Tributes page to make it easy to share your memories.

Send flowers to the Wallace family.