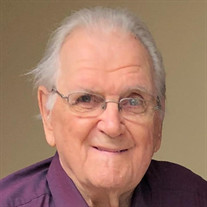 Emerson E. Marcks, age 94, passed away peacefully at home on Monday, March 2, 2020 with his loving wife of 67 years at his side. The son of Henry and Gertude (Harbrecht) Marcks, he was born on April 27, 1925 in Seymour, Wisconsin. Emerson grew up helping on the family dairy farm, and later enlisted in the U.S. Army where he served as Technical Sergeant in World War II transporting German prisoners. Upon his return to Wisconsin, he attended business school in Green Bay where he studied accounting. He married Mariann Eliason in 1952 and had a 43-year career as an accountant with U.S. Steel. His job carried them and their 3 sons from Green Bay to Milwaukee to Georgia, where he retired from U.S. Steel in Atlanta in 1984. He and Mariann relocated back to Green Bay in 1997. Emerson enjoyed playing golf, cheering for the Packers, and doing crossword puzzles. He also loved woodworking and built many birdhouses and yard decorations over the years that Mariann would then paint for him – they were a great creative team. He was active at St. John Lutheran Church in Ashwaubenon and his faith was an extremely important part of his life. Emerson was known as a prayer warrior and constantly lifted his family and friends up in prayer. He was a 3-time cancer survivor and credited his remarkable recoveries to his strong faith, constant prayer, and trust in God’s healing power. Emerson is survived by his wife, Mariann, his sons Jay (Helen) Marcks of Green Bay and Keith (Sherry) Marcks of Atlanta; his grandchildren Jason, Jake, Amanda, Drew, Derek, and Dylan; his great grandchildren Selah, Eden, Charley, Chantz, and Kiley; and his beloved dog Bitsy. He is preceded in death by his oldest son Steven, his parents, his brother Marvin, and sister Orpha Rusch. A celebration of Emerson’s life and memorial service will be held on Saturday, March 14 at 1:00 PM at St. John Lutheran Church, 2700 Babcock Road, Ashwaubenon, with refreshments in the fellowship hall following the service. In lieu of flowers, donations may be made to Amvets or the American Cancer Society.

Emerson E. Marcks, age 94, passed away peacefully at home on Monday, March 2, 2020 with his loving wife of 67 years at his side. The son of Henry and Gertude (Harbrecht) Marcks, he was born on April 27, 1925 in Seymour, Wisconsin. Emerson grew... View Obituary & Service Information

The family of Emerson Marcks created this Life Tributes page to make it easy to share your memories.

Emerson E. Marcks, age 94, passed away peacefully at home on...

Send flowers to the Marcks family.