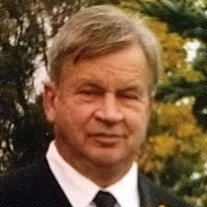 Edmund Stanley Jankowski was called to his resting place on February 25, 2021.  Edd was born on September 8, 1944 in Goodman, Wisconsin. He graduated from Goodman-Armstrong High School in 1962 and immediately went to work in the office of Goodman Lumber Company.  Edd was later transferred to the Northern Michigan Spliced Veneers office in Gladstone, Michigan where he stayed for several years.  It was there he met and married his wife, Jackie, on September 13, 1969. After moving to Green Bay in 1972, he started his own home-building business, became president of the Brown County Home-builders Association and participated in several Brown County Showcase of Homes.  On September 11, 2001 Edd and Jackie purchased the Shoreline Inn on Crooked Lake in Mountain, Wisconsin where he spent his remaining years. He enjoyed the business and the people, making so many new friends and acquaintances. Edd always made sure the Shoreline was open for the holidays every year, having plenty of food for the individuals that were alone or had no place to go. He also threw a huge Customer Appreciation Party every Labor Day weekend for anyone that wanted to come. Edd had a big, generous heart, never wanting anything in return.  Edd was a loyal fan of the Green Bay Packers and was a season-ticket holder.  In addition to the Packers, he was also an avid Nascar fan enjoying several trips with his buddies to the race tracks.  Edd would ride and race his Polaris snowmobiles for many years throughout Michigan and WI.  He also loved his polish music attending many Polish Fesitivals. Edd is survived by his former wife and friend Jackie, daughter Bobbi Jo (Donny) Leisner, Green Bay; grandson Julien Leisner, Green Bay; brother Paul (Jane) Jankowski, South Carolina, sister Rosemary Jankowski, Green Bay; Nieces and nephews, Bryon (Lori) Jankowski, Green Bay, Jill (Robert) Katers , Green Bay, and Bradley Jankowski, Mississippi; great nieces and nephews Lukas, Kasey, Kylie, Marisa, Haley, Jarek and Jake .  Edd was preceded in death by his parents, Mary (Cernick) and Stanley Jankowski, Armstrong Creek, WI. The family would like to extend a very special thank you to Brenda Braun, and James Hanson for their compassion and support to Edd, and to the staff at the Bellin Cardiac ICU. In honoring his wishes, the family will hold a celebration of Edd’s life, at a later date.  Condolences may be sent to The Jankowski Family at 1834 Rowe Lane, Green Bay, WI  54303 Simply Cremations is assisting the family.

Edmund Stanley Jankowski was called to his resting place on February 25, 2021.  Edd was born on September 8, 1944 in Goodman, Wisconsin. He graduated from Goodman-Armstrong High School in 1962 and immediately went to work in the office of Goodman... View Obituary & Service Information

The family of Edmund Stanley Jankowski created this Life Tributes page to make it easy to share your memories.

Edmund Stanley Jankowski was called to his resting place on February...

Send flowers to the Jankowski family.