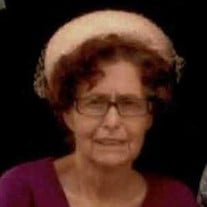 Doris Madlyn ‘Maddie’ Hart, 89, went to be with her Lord and Savior Jesus Christ September 14th 2019 with her daughter Lisa by her side and was attended by the loving staff of the Pete and Jelaine Horton Skilled Nursing and Hospice Care Center in Sturgeon Bay. Madlyn was born March 6, 1930 to Ada Isola (Altman) and Tommie Jackson Hamner in Lubbock, Texas. She was the oldest girl of nine children. She grew up helping her family on the cotton farm, sharing some of her favorite childhood memories including fishing for tarantulas and (maybe not a favorite) picking cotton after school to help out the family. She and her family moved to the San Francisco Bay area prior to WWII, her parents both working in the shipyard to aide in the war effort. She met her true love while living there a Navy Sailor from Iowa, Earl Edward Hart. Earl and Madlyn were married on January 1st, 1949 and had five children. Katherine, Clarice and Maurice were born in Iowa while Earl went to college after the war. Madlyn and Earl then moved back to the San Francisco Bay area where they lived for the next 25 years where they had two more children Lisa and Thomas. Earl and Madlyn retired to the family farm near Webb, Iowa where Madlyn lived until 2009 when she relocated to Sturgeon Bay to live with her daughter Lisa. Madlyn is welcomed into the Kingdom by her parents, husband Earl, brothers Clifton and Harlan Hamner, sister Virginia (Hamner) Osborne as well as sons Maurice Earl and Thomas Bert Hart. Madlyn is lovingly remembered by her living legacy including daughters Kathy Fiske, Clarice and Lisa Hart; nine grandchildren Sarah Maslov & Matthew Micah (Joolia) Maslov, Joshua & Jason(Christa)Hart, Alexandra Hart-Betancourt(Troy) & Jonathan White, Kelsey (Justin) Hotchkiss, Tymothy (Kenzie) Hart and Cameron Hart; fourteen great grandchildren and numerous nieces and nephews. Madlyn enjoyed gardening, sewing, quilting, traveling and going fishing with Earl. She was an active member in her church(s) through the years and volunteered in the numerous organizations, she was a Sunday school teacher, as well as den mother for Maurice’s Boy Scout troop. She devoted her life to her Savior, her husband and her family. She read and memorized numerous passages in the Bible and still could recall them. Later in life she helped care for neighbors in need of assistance, she constantly gave her time and skills to those in need until she was no longer able to. She was able to travel to Georgia, Russia on a mission’s trip and take her dream trip to Israel following the footsteps of her Savior and enjoyed spending winters with her sister Virginia in Arizona and daughter Kathy in California. While in Sturgeon Bay she enjoyed going to church at First Baptist Sturgeon Bay and spending time at the ADRC Community Center. Madlyn enjoyed life, her family and friends and her fashionable hats. Madlyn will be missed by her loving family and we know she will be waiting with our Savior to greet us when we are called home as well. A Celebration of Doris’s life will be held at 1 p.m. on Sunday, November 10, 2019, at First Baptist Church of Sturgeon Bay, 610 N. 5th Ave., Sturgeon Bay, PRIOR to the celebration of life will be a potluck meal at church at 11:45 a.m.

Doris Madlyn &#8216;Maddie&#8217; Hart, 89, went to be with her Lord and Savior Jesus Christ September 14th 2019 with her daughter Lisa by her side and was attended by the loving staff of the Pete and Jelaine Horton Skilled Nursing and Hospice... View Obituary & Service Information

The family of Doris "Maddie" Hart created this Life Tributes page to make it easy to share your memories.

Send flowers to the Hart family.