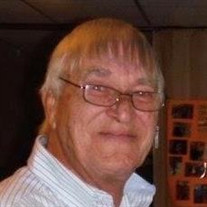 Donald G. Thurlow, 70, Green Bay, passed away Friday, June 12, 2020, at a local nursing home. He was born August 28, 1949 in Green Bay, son of the late Garland and Helen (Beyer) Thurlow. Don attended Green Bay West High School, and shortly, but proudly served his country in the United States Air Force, having to be medically discharged. He was married to Jacqueline Burns but parted ways long ago; always remaining good friends. Don had worked at Samuel’s Recycling Center in Green Bay. Don was most proud of his son who was his pride and joy. Don enjoyed trips to the casino, heading to the campground in Shawano, family gatherings, spoiling resident and foster dogs, and having pizza with his son. Don was also very involved with Lucky 7 Dog Rescue where he was part of a foster family. Survivors include his son and daughter-in-law, Donald M. (Melissa) Thurlow of Green Bay; former step-children, Mike Wieber and Jennifer Wieber; grand-dogs: Ivy, Felix and Miracle; sister, Mary Ann (Dick) Conard; brothers, Gary (Sue) Thurlow, and Larry Thurlow; sister, Rosemary (Gary) Hendricks, and brother in law Roy Paider; many nieces, nephews, great-nieces and nephews (special niece, Debbie Daul, and special friends, Jackie and Al Carilo. In addition to his parents, Don was preceded in death by his sisters, Nancy Thurlow, and Linda “Loopy” Paider, as well as gran-dogs Chloe and Jinxie. A Celebration of life is being planned for a later date. Online condolences may be expressed at www.simplycremationgb.com. Special thanks to Woodside Senior Communities and Heartland Hospice for their spectacular care.

The family of Donald G. Thurlow created this Life Tributes page to make it easy to share your memories.

Send flowers to the Thurlow family.