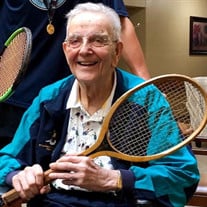 Donald E. Rondou, aka "Coach", passed away on Monday, March 2nd, at the age of 87, at Woodside Manor in Green Bay. The only child of the late Marion and Edgar Rondou was born July 29, 1932, in Green Bay. Don attended West High School where he was a star in football, basketball, and tennis. While at West High, he excelled in tennis. Until last year when his record was broken, he was the only local Green Bay tennis player to win the Boys State Single Championship Title. Heavily recruited, Don chose to attend Northwestern University where he played quarterback, defensive back and also punted for the Wildcat's football team. Don was also a very integral part of the tennis team, playing doubles and singles throughout his 4 years. The most pivotal part of Don's college career, was meeting Jane Sutton, who was a member of the Synchronized Swim Team at Northwestern, and was his avid scholar. Don and Jane were married on September 1, 1956. After graduating from Northwestern, Don signed a contract to play for the NFL's Washington Redskins, and played for head coach, Curly Lambeau. Don then pursued his love for the game of tennis, and was the first tennis pro at the inception of Western Racquet Club in Green Bay. Throughout the years, he taught hundreds of local tennis players from the Green Bay area, and was inducted into the Brown County Tennis Hall of Fame, where he served as a charter member. Even into his 60's, Don was still playing tennis competitively. During this time, he was given the opportunity to coach both the Women's and Men's teams at St. Norbert College, where he eventually led the Women's team to the Division 3 Rolex National Team Collegiate Championship. After Don and Jane both retired, they enjoyed 20 years of living year round in Door County. Baileys Harbor was their sanctuary. Watching the Packers, any and all tennis matches on TV, and spending time with family and friends was what he looked forward to every day. We will miss his wit and sassy sense of humor...there was never a dull moment when he was around! Survivors include his wife of 64 years, Jane; four children : Perry (Beth) Rondou, Green Bay, Craig (Diane) Rondou, East Lake, FL., Pam (David) Stahlke, Green Bay, Kevin (Tiffany) Rondou, Pulaski; Grandchildren: Lindsay (Steve) Lantz, Annapolis, MD, Austin Rondou, Minneapolis, MN, Brock (Mariah) Stahlke, Sturgeon Bay, Kaden Stahlke, Sturgeon Bay, Bella and Grayson, Pulaski, Gabriel Rondou, East Lake, FL.; Great Grandchildren: Henry,Violet, and Ruby Lantz, Annapolis, MD. Don's family would like to say a BIG thank you to his Cardiologist, Dr. Jazayeri, and his team for giving us an additional 3 years to make memories with Dad. Thank you, thank you, to all of the staff at Unity Hospice for your guidance, care and compassion throughout this time. You are all such amazing people. We'd also like to thank all of the staff and residents at Woodside Manors. There are no words to express how much you meant to Dad, how many friendships and memories he gained, and how much you mean to Mom and the rest of the family. Per Dad's wishes, there will be no service, but please stop by for a "Celebration of Life" gathering for him to share some memories with us on Saturday, April 18th, anytime from 12pm-4pm at the Woodside Chapel (1040 Pilgrim Way, Green Bay 54304)

Donald E. Rondou, aka "Coach", passed away on Monday, March 2nd, at the age of 87, at Woodside Manor in Green Bay. The only child of the late Marion and Edgar Rondou was born July 29, 1932, in Green Bay. Don attended West High School where he... View Obituary & Service Information

The family of Donald Rondou created this Life Tributes page to make it easy to share your memories.

Send flowers to the Rondou family.