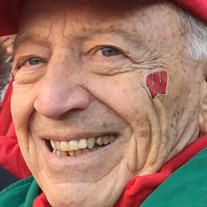 Donald John Anderson peacefully passed away on Sunday, November 1 st in the embrace of family at his home in Appleton.  He had recently celebrated his 99th birthday in his hometown of Ashwaubenon.  He was preceded in death by his wife of 73 years Dorothy Diamond, his siblings Emily (Jack) Nelson and Harold (Pat) Anderson, his two granddaughters Charly Rose and Autumn, and his great-granddaughter Zaynab. Born on October 9, 1921 in the town of Ashwaubenon, Don attended Cormier School, a one-room school house named after his maternal grandfather who had donated the land. In his youth, Don reached the rank of Eagle Scout and excelled in math and science. After graduating from Green Bay West High School with honors, he earned a degree in Chemical Engineering at the University of Wisconsin-Madison and membership in the national mathematics honor society of Pi Mu Epsilon.  He married Dot in 1944 and eventually settled in Neenah, where he raised his family and worked at Kimberly-Clark Corporation.  In summer Don's family enjoyed road trips to explore the natural wonders and grand cities of North America.  Don also had a special regard for his parents’ cottage on Grindle Lake near Mountain, Wisconsin, a favorite gathering place for the Anderson, Cormier, Griffiths and Nelson Clan on holidays. After retirement, he continued traveling with Dot to many parts of the world, visiting family and friends on the way. Don’s life, flanked by two pandemics, spanned a century.  He was familiar with the hardship of the Great Depression, World War II, and a permanent childhood injury, all of which fostered the humbleness, integrity, kindness, and gratitude that distinguished his life.  He gave his best as husband and father at home, as inventor and researcher at work, and as citizen and friend in his community. He loved a poignant play, a good laugh, a jolly song, a game of cribbage and the thrill of a roller coaster.  He was a loyal Packer and Badger fan, but was no couch potato. He could dance a smooth foxtrot, bowl a 300 game, and even had a hole in one in golf.  He loved life and he shall be deeply missed. Donald is survived by his six children: Greg (Shari) Anderson of Appleton; Cindy (Alfred) Anderson Arthurs of Negril, Jamaica; Patricia (Thomas) Anderson Rajman of Zurich, Switzerland; Jeanne (Larry Hanrahan) Meyer of Madison; Judy (Galen) Anderson of McCall, Idaho; and Jacqueline (Jim Ashby) Anderson of Bellingham, Washington; one sister-in-law Betts Diamond; his grandchildren Matt, Jenny-Viva, Portia, Jaime, Iris, Wavey, Liam, Freddie, Molly, Irene, Kellen, Michael, Luke, Sean, Juniper, Sam and Katja; his great-grandchildren Claire, Rose, Adyn, Stella, Camryn, Simone, Penny, Lucinda, Rowyn, Weylin, Elissa, Clive, Mira, June, Ava, Theo, Chase and Elijah; and many nieces, nephews and cousins. The family would like to thank the staff at Appleton Retirement Community for their uncompromising quality of care for Don during his residency there. They would also like to thank the wonderful neighbors he had on Chestnut Street and all the medical professionals that cared for him. Many families have had to cope with difficulties during the Covid-19 pandemic, and Donald’s family is no exception.  They look forward to celebrating their father’s wonderful life when the entire family can safely come together again. The thing that goes the farthest toward making life worth while, That costs the least, and does the most, is just a pleasant smile. The smile that bubbles from the heart that loves its fellowmen Will drive away the clouds of gloom and coax the sun again.

Donald John Anderson peacefully passed away on Sunday, November 1 st in the embrace of family at his home in Appleton.  He had recently celebrated his 99th birthday in his hometown of Ashwaubenon.  He was preceded in death by his wife of 73... View Obituary & Service Information

The family of Donald John Anderson created this Life Tributes page to make it easy to share your memories.

Send flowers to the Anderson family.