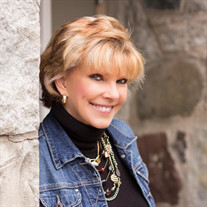 Diane Charles, age 63, passed away October 5, 2019 after a courageous battle with cancer. Diane was a proud graduate of Bayport High School and enjoyed staying in touch with friends and family through social media. Her greatest joy in life was being a mother to her twin daughters, Jes and Jen, and grandmother and godmother to Zoë. Her final wish was fulfilled when she met her second granddaughter, Alexia, just before her passing. She enjoyed traveling and road trips with family and friends. She was most happy spending time with her family. Diane worked in sales and marketing most of her life. After retiring from Nestlé, Diane worked for her daughter at Jen's Knaughty Pine for nearly 13 years. Her homemade soups were famous throughout the Angelica area, as was her contageous smile. Even following her cancer diagnosis, Diane lived everyday to the fullest. She remained the same compassionate, uplifting person - and momma bear - she had always been. She touched the lives of many and she will be truly missed. Diane is survived by her daughters, Jes (Ron) Zimmerman, Jen (Randy) Olson; special forever friend and Jes and Jen's stepfather, Bob Charles, granddaughters Zoë and Alexia Zimmerman; brother, Doug (Kathy) Nelson; nieces, Janalee Nelson and Shannon (Ryan) Servais; great nephews Will and Zach Servais; stepdaughter Michelle (Dan) Haave, stepgrandsons, Zachary and Nicholas Haave; stepson and caretaker, Rob Charles; and special friends, Ric Hartman and Warren Kamke. Diane is preceded in death by her parents, Urban and Milda (Koistinen) Nelson and brother, Ronald Nelson. A special note of thanks to the amazing staff at The Cancer Team at Bellin Health, especially Dr. Hassan Tahsildar and the entire cancer team family, and Unity Hospice. Visitation will be held at Grace Lutheran Church (321 S. Madison Street, Green Bay) on Monday, October 14th from 10am - 12 noon with funeral services to follow at 12:00. In lieu of flowers, donations can be made to Grace Lutheran Church - Sunday School Program.

Diane Charles, age 63, passed away October 5, 2019 after a courageous battle with cancer. Diane was a proud graduate of Bayport High School and enjoyed staying in touch with friends and family through social media. Her greatest joy in life was... View Obituary & Service Information

The family of Diane Charles created this Life Tributes page to make it easy to share your memories.

Send flowers to the Charles family.