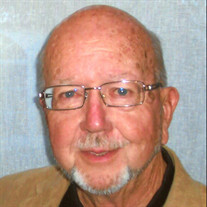 Dennis L. Gorecki, 79, De Pere, WI, died peacefully in his sleep Friday, October 9th, at The Jack and Engrid Meng Residence at Unity Hospice, in De Pere, WI, after a courageous battle with cancer. He was born April 7th, 1941, in Wausau, the son of the late Leonard and Myrtle (Olds) Gorecki. Dennis graduated from Mosinee High School and was very active in sports. He loved to play and watch all sports, especially golf, baseball, and football. In early February of 1959, Dennis enlisted in the Navy Reserves. He served his active duty on the destroyer USS Fred T Berry DDE 858, as Yeoman 3rd class and made many lifelong friends. After his honorable discharge from the Navy, Dennis met his future wife, Sandra, when he was working as a police officer on the Rothschild Police Force. He married Sandra A. Schneck on August 22nd, 1965, in Wausau, WI. Where they started their family and had two daughters. Soon after, they moved from Rothschild to Green Bay, where he worked as the VP/General Manager with JJ Security, Inc. who provided electronic security systems and guard services for homes, businesses and industry as well as airport crash/rescue and preboard screening services throughout the United States. Traveling was a highlight for both Dennis and Sandy. Whether it be for work or pleasure, Navy reunions were at the top of his list which often included his brother, John and his wife Carol. Dennis truly loved going to new places and telling others about the adventures and laughs that they had. They became friends with many people during those trips and still remained in contact with them up until the end. They also enjoyed and attended many Packer games and plenty of parties with friends and family. Dad’s passion, other than having perfectly cut grass, was golfing. One of the best memories was had this past February when he and his good friend Burt traveled to Florida for a weeks’ worth of golfing. It was just what he needed! Dennis is survived by his wife, Sandra A Gorecki, De Pere WI; daughters, Laura Kaminski, De Pere, WI and Kristine Lux, Ashwaubenon, WI; grandchildren, Cassie (Eric) Billups, Minnesota, Lindsey Kaminski and her friend Cole, Minnesota, Madelyn Kaminski, De Pere, Zachary Lux, and Matthew Lux both of Green Bay; one great granddaughter, Ellery Joy Billups; sister, Donna Schermer, Mount Pleasant; sisters-in-law, Carol Gorecki of Mosinee and Sharon (Jack) Kramer; along with many nieces, nephews and cousins. He was preceded in death by his brother, John Gorecki; sister, Judith Vercimak; in-laws, Eleanor and Melvin Schneck; sister-in-law, Susan (Jerry) Slagoski; and brother-in-law, James (Sue) Schneck. Because of the current outbreak of Covid-19 we will not be having a service at this time. The family is planning a Celebration of Life when we can all safely come together to honor and celebrate the life of our father and friend. The family would like to extend a special thank you to Burt and Cathy Hughes; your support and commitment to our family is very special. Also, to Unity Hospice, his primary team, Ashley and Hailie, the residence and crisis staff, and everyone that came together to help us during this time. From the folks at the end of the phone, to the folks coming into our home, you all made such a difference and we are grateful. Donations can be made to Unity Hospice in memory of our father.

Dennis L. Gorecki, 79, De Pere, WI, died peacefully in his sleep Friday, October 9th, at The Jack and Engrid Meng Residence at Unity Hospice, in De Pere, WI, after a courageous battle with cancer. He was born April 7th, 1941, in Wausau, the... View Obituary & Service Information

The family of Dennis Gorecki created this Life Tributes page to make it easy to share your memories.

Send flowers to the Gorecki family.