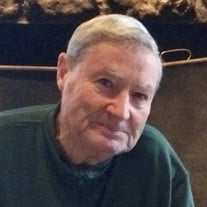 On August 21, 2020, we lost our beloved husband, father, grandfather and Uncle. Dennis was born in Cincinnati, OH on June 4, 1937 to Bessie (McVay) and Roy Bryan. The family moved to Kalamazoo, MI when he was one month old and he attended Western Michigan University's Campus School from kindergarten through the 12th grade. This is where, in the 7th grade, he met a new student at the school, Ann Malotte, the love of his life. They became high school sweethearts and were married in 1958. Dennis worked for the City Forestry Department in Kalamazoo during the summers while in high school. Throughout college he owned and ran his own Landscaping and Tree Trimming business. He began college planning to become a Forester, but changed to Education after being a counselor at a YMCA summer camp and enjoying working with the young people. His Freshman and Sophomore years were at Carthage College and then transferred to Western Michigan University where he earned a B.S. degree, Masters Degree and a teaching license. After teaching 6th grade for three years in Portage, Michigan, the family moved to Lansing, MI where Dennis attended Michigan State University where he earned a PhD in Education. In 1969 Dennis and Ann moved the family to Green Bay. Dennis was one of the first faculty members in the Education Department at the University of WI-Green Bay. During his 27 years as a professor, he helped to build the department from a two-year institution into a 4-year program with a masters program. He greatly missed his contact with students after his retirement in 1996. Dennis was also an owner of an educational consulting business that provided long-term strategic planning studies for public schools in Wisconsin and Michigan. Dennis and Ann built the house of their dreams in the country, in New Franken, in 1971. They felt blessed to have such a wonderful, natural sanctuary. Dennis was an avid gardener, a talented birder and a true naturalist. He enjoyed experimenting with various types of Heirloom tomatoes in his greenhouse to get a jump start on the growing season. His love of hunting and fishing started during his childhood and became a life long passion. He hunted throughout the Midwest, but his favorite hunting trips were to Saskatchewan, Canada with his friend Lyle Martens and their Labradors Charlie and Teal. He fished throughout Michigan, Wisconsin, the Florida Everglades and fly-in trips to Canada. Dennis is survived by his wife, Ann, his sister Ruthann (Don) Wood, Gosport, IN; their four children: Scott (Debra) Bryan, Chanhassen, MN; Douglas (Beth) Bryan, Wheeling IL; Deborah (Pat ) Walsh, New Franken, WI; Michael (Georgia) Bryan, Wilton, CA. Grandchildren: Drew ( Laura) Bryan, Rogers, MN; Kevin Bryan, Minneapolis, MN; Spencer Bryan, Redding, CA; Alex Bryan, Green Bay, WI; Jordan ( Melanie) Walsh, Madison WI; Eric Walsh, Verona, WI ; Travis Bryan, Wilton, CA ; Annelise (Josh) Eastes, Las Vegas, NV. Also greatgrandchildren: Maria and Isaac Bryan, Rogers, MN; and a Walsh baby due in September. Nieces and Nephews in Michigan, Indiana, Pennsylvania and Washington. Honoring Dennis’ wishes, there will be no public funeral services. In lieu of flowers, memorial donations may be made to Nature Conservancy (https://www.nature.org/en-us/ ).

On August 21, 2020, we lost our beloved husband, father, grandfather and Uncle. Dennis was born in Cincinnati, OH on June 4, 1937 to Bessie (McVay) and Roy Bryan. The family moved to Kalamazoo, MI when he was one month old and he attended Western... View Obituary & Service Information

The family of Dennis Bryan created this Life Tributes page to make it easy to share your memories.