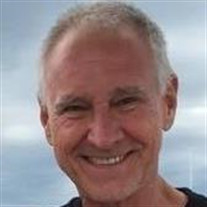 Daniel J. Hoffman (Hoffy), age 69, of Howard passed away Saturday morning, September 28, 2019, at home with his wife Amy and their snuggle buddy dog AJ by his side. Dan was born June 21, 1950 in Manitowoc to the late John and Angeline (Brotski)... View Obituary & Service Information

The family of Daniel J. Hoffman created this Life Tributes page to make it easy to share your memories.

Send flowers to the Hoffman family.