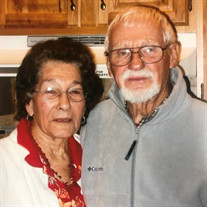 Daniel Buschatz, 95, Townsend, died unexpectedly, September 2, 2021. Dan was born in Milwaukee on April 3, 1926 to the late Max and Joan (Krenz) Buschatz. He graduated from Pulaski High School in Milwaukee in 1944 and enlisted in the United States Air Force where he became an Aerial Gunner during WWII. After he was honorably discharged, Dan attended the University of Wisconsin-LaCrosse and went to teach phy ed and science, touching the lives of hundreds of students and fellow faculty members for 33 years at Soloman Juneau High School in Milwaukee. He also coached girls volleyball and served as the Athletic Director. Dan married his life-long sweetheart, Laurel Rathburn, in Green Bay on Aug. 18, 1951. He was a devoted husband for 66 years and he and his wife had two daughters, Margaret (Duane) Anderson and Barbara Brodahl. Dan was preceded in death by his wife, Laurel; oldest daughter, Margaret; brother, Bruno; sister, Betty (Millard) Newton; and his parents. Dan was a head lifeguard at Bradford Beach, an active member of the Lakewood Lions Club for over 30 years, an avid fisherman and golfer, and a member of the Loyal Order of the Moose in Chiefland, FL, where he and Laurel spent many winters. At 95 years old, Dan still played golf and walked each day to the Post Office where he loved to socialize and tease the Post Mistress. Almost every Saturday night you could find Dan tapping his toe to Lawrence Welk with his little dog on his lap. He is survived by his daughter, Barbara Brodahl, Coleman; granddaughter, Ashley Brodahl, Green Bay; two great-grandchildren, Dylan Brodahl and Katie Knaus, Green Bay; sister, Rita (Bud) Kuhrasch, Laona; and many loving in-laws, nephews, nieces and great friends including: Larry, Dolly, and Mort. He will be dearly missed. Online condolences may be expressed at www.simplycremationgb.com

Daniel Buschatz, 95, Townsend, died unexpectedly, September 2, 2021. Dan was born in Milwaukee on April 3, 1926 to the late Max and Joan (Krenz) Buschatz. He graduated from Pulaski High School in Milwaukee in 1944 and enlisted in the United... View Obituary & Service Information

The family of Daniel Buschatz created this Life Tributes page to make it easy to share your memories.

Send flowers to the Buschatz family.