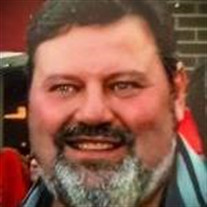 Daniel Beyer, 63, of Shawano, Wisconsin passed peacefully on January 25, 2022. Dan was battling cancer and was surrounded by loved ones in his final moments. Dan was a person who loved people, especially his family. He was remembered for his outgoing personality. He seemed to know everyone. Dan was born in Shawano, Wisconsin on October 18, 1958 to parents Robert and Donna (Niemuth) Beyer. He completed high school at Shawano and one year at Fox Valley Tech school. Dan worked various sales job over the years including Kirby, Kossels, and American Marine. He also screen printed thousands of t-shirts over the years for businesses all over the state. However, his true love was farming because of his grandparents. In 2000, Dan and his wife Mary, bought a Christmas tree farm in Navarino township which became Wildwood Farms. They operated a produce stand on Green Bay St. in Shawano for nearly 20 years. Dan was affectionately known as "The Corn Man". He thrived on talking with his many loyal customers throughout the years. He was an avid outdoorsman who loved to hunt and fish. He also was a master dart thrower and participated in many leagues. He loved watching sports especially the Green Bay Packers and the WI Badgers. Dan is survived by his loving wife, Mary (Sum) Beyer, his children, Becky (Jeff) West, Marie (Sean) Healy), Jennifer (Del Porter) Zimmerman, Samantha (Tyler) Griffin, Danielle (Jake) Zinsli, Zach (Isha) Beyer, and Melissa Bischoff, grandchildren Sabrina, Katlyn, Makaylah, Olivia, Neveah, Mackenzie, Cheyenne, Christine, Lily, Zoey, great-grandchild Grayson, mother Donna (Niemuth) Beyer, Tammy (Mark) Langfield, Pamela Goodreau, Robert (Lindsay) Beyer, Jr., sister in law Tina (Mark) Westphal, and many nieces and nephew. He is also survived by his loving dog Bandit and cats Lily and Lacy. He is preceded in death by his infant daughters Theresa and Christine, his father Robert Beyer Sr., grandparents Herman and Meta Beyer, Harold and Ruby Niemuth, brother in law Daniel Goodreau, and his loving dog Hunter. A celebration of life will be held for family and friends at the American Legion Hall on February 27, 1-4 pm with short service at 2 pm. In Lieu of flowers please donate to St. Jude's Children's hospital. Please be respectful of those around you during this time of Covid.

Daniel Beyer, 63, of Shawano, Wisconsin passed peacefully on January 25, 2022. Dan was battling cancer and was surrounded by loved ones in his final moments. Dan was a person who loved people, especially his family. He was remembered for his... View Obituary & Service Information

The family of Daniel Beyer created this Life Tributes page to make it easy to share your memories.

Send flowers to the Beyer family.