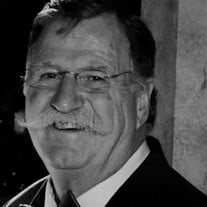 A life so beautifully lived deserves to be beautifully remembered. Please join us to mourn the passing of Dan (James Daniel) Spice. Dan passed away early Sunday March 6th at home while holding hands with his beloved wife and daughter after a brief yet courageous battle with pancreatic cancer. Dan was born August of 1947 to Elton and Jeanette (Janssen) Spice (deceased), the baby of a family of five. As a youth he enjoyed anything and everything to do with water and was a skilled barefoot skier at a young age. Dan attended Abbot Pennings and East High School (Class of 1966) where he took the role of the mascot as the "Red Devil". He was a proud member of band at Abbot Pennings and East High where he played the drums. Most summers you could find Dan out on the Bay with his best friends Carol Motiff Spice and Tom Libert sailing, fishing and waterskiing. Later, Tom would be the best man when Dan took Carols' hand in marriage in May of 1970. The pair continued their sailing and life adventures and moved to Illinois. Dan then began serving at the Waukegan Fire Department, beginning as a firefighter, later advancing to paramedic/EMT and member of the WFD Bomb Squad. After receiving his PADI certification he advanced to the WFD Marine Search and Rescue Team. He graduated with a Fire Science Degree (1983) where he then became a WFD EMT instructor. Dan was very honored to rescue the many he did, and he counted himself lucky to save the lives that he had. They then welcomed their only child and daughter, Brenna, in the summer of 1980. In 1987 Dan, with family in tow, moved back to Wisconsin to be closer to his family and friends and his beloved Fox River. Locating on the Niagara Escarpment in south De Pere Dan utilized his Fire Science education by working as Director of Safety at Dean Foods/Agrilink. Just as when Dan was younger, most days you could find him golfing, boating and fishing on the Fox River and Green Bay. After retirement Dan and Carol enjoyed travelling as much as possible and spending time on their small yacht "Spice-Sea". James Taylor songs blasting, he'd sit on the back of the boat, pole in hand, a mystery novel nearby, sipping a cold beer and admiring the lake and sunset. This is how we now like to picture Dan... catching some perch, just laughing and enjoying life. Dan was the kind of guy who easily made friends and was always eager to help those in need, perpetually quick with a joke or comical anecdote. Dan proudly served on the National Firefighters Union, Optimists Club, PADI (Professional Assoc. of Diving Instructors), and most recently as a board member of the De Pere Men's Club happily delivering for Meals on Wheels. Dan is terribly missed and survived by his loving wife Carol Spice and doting daughter Brenna Spice, brother Jack Spice (Joyce), sister Jeanne Spice Jennings (Wally), Judy Spice, sister-in-law Judy Hendrickson Spice. Dan is preceded in death by his parents, brother Bill Spice, sister Pat "Tricia" Spice Pierquet, niece Lori Pierquet, nephew Jason Spice and brother-in-law Bill Motiff. A celebration of life will be held at a date later to be determined at The Ennis Inn in De Pere so that we may honor the memory of such a wonderfully kind and respectful man.

A life so beautifully lived deserves to be beautifully remembered. Please join us to mourn the passing of Dan (James Daniel) Spice. Dan passed away early Sunday March 6th at home while holding hands with his beloved wife and daughter after a... View Obituary & Service Information

The family of Dan (James Daniel) Spice created this Life Tributes page to make it easy to share your memories.

Send flowers to the Spice family.