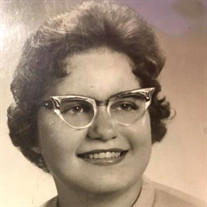 Cheryl June Breitlow, 76 passed away on October 7th 2019. She will be lovingly guided into Heaven by her beloved husband Donald. Cheryl was born on July 24, 1943 to William and Margaret(Nelson) Bastar. She graduated from Sturgeon Bay High School. She then attended Beauty School in Green Bay where she was gifted a Mink Stoll for being Best in Class. She loved doing hair and you would never see her without her hair done and makeup on. On May 17, 1969 she married Donald Glen Breitlow and became a farmer’s wife. The thing she wanted most in life was to be a mother and she was blessed with 5 children. She is survived by her 5 children which include: Erik (Tammy) Breitlow, Tara (Todd) Doperalski, Troy Breitlow(fiancé Annalyn Renconada), Shana (Jason) Breitlow-Bongle, and Krista Breitlow. She has 12 beautiful grandchildren to include: Kira, Riley, Sawyer, Noah, Ava, Jonah, Gunnar, Grayson, Gavin, Maya, Reese and Alec. She is also survived by all 3 of her brothers which include: William (Shirley) Bastar, Dennis Bastar, and Jeff (Barb) Bastar and many loving nieces, nephews, cousins and friends. She was preceded in death by her husband Donald Breitlow, her parents William and Margaret Bastar, In-laws Erwin and Gertrude Breitlow, one sister in law Marlene Schlaefer and one brother in law Kenneth Breitlow. Cheryl was a very loving and creative soul who was always trying to do for others, especially with her cooking and baking. Her interests included Hairdressing, Baking, Ceramics and anything else she could apply her creativity to. This also included decorating her home and her children. Dressing her children up cute when they were small and then her grandchildren was one of her favorite things to do. Per Cheryl’s wishes the family will be having a private ceremony on Saturday and then a larger celebration of her life for close family and friends, date to be determined. Cheryl’s children would like to express their gratitude to all of her doctors, the staff at Davita Dialysis, Odd Fellows, Allouez Parkside and Heartland Hospice for their compassion and care.

Cheryl June Breitlow, 76 passed away on October 7th 2019. She will be lovingly guided into Heaven by her beloved husband Donald. Cheryl was born on July 24, 1943 to William and Margaret(Nelson) Bastar. She graduated from Sturgeon Bay High School.... View Obituary & Service Information

The family of Cheryl Breitlow created this Life Tributes page to make it easy to share your memories.

Send flowers to the Breitlow family.