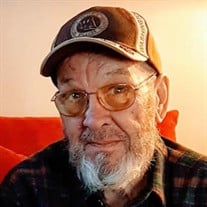 Charles Bailey Smith, of Sturgeon Bay, Wisconsin passed away Monday afternoon, October 18, 2021 after a long battle with cancer. He was 84 years old. Charles was born and raised in Auburn, New York. He shared fond childhood memories of riding his pedal car, listening to the radio with his grandfather, being invited to watch Gene Autry and the Lone Ranger on television, and his days fishing with his grandfather Roy. He spoke of his jobs as a paperboy, and, later, milking cows and harvesting crops before and after school. Charles was proud of his earliest career as an Electronics Technician for the US Coast Guard where his accomplishments took him on far travels, whereby he acquired the famed "Squareknot" status. He settled in the Seattle area and later worked many years in Information Technology. He retired in 1991 and moved to Sturgeon Bay, WI, his wife Daun’s hometown. Throughout his life, Charles was a model of hard work and perseverance. He patrolled frigid ocean waters. He was a father of 6 and foster parent to countless others. He worked long hours. When diagnosed with cancer, he took himself to chemotherapy appointments. Later, when he went on hospice in 2019, he “graduated” 11 months later and returned home to resume his hobbies. Charles is survived by his younger brother Steven (Mary) Downing; his children Mark, Marcy (Carol), Matthew, Melissa (Richard), and Angelee (Grant); his great nephew Dante; his daughter-in-law Yvonne; his grandchildren Amanda, HollyAnn, Nerissa, Taizha, Risati, Taite, Cheyenne, Alexandra, Avory, Austin, and Owen; and his great-grandchildren. He is preceded in death by his wife Daun (Suess) Smith; his father Charles Neafie Smith; his mother Vera (Bailey) Downing; his step-father Mark Downing; his brother Roger Smith; his son Michael Smith, and his daughter-in-law Florence Smith. Charles wished to be laid to rest next to his father, Charles Neafie Smith, in his hometown of Auburn, New York. Interment will follow at a later date for close family and friends.

The family of Charles Bailey Smith created this Life Tributes page to make it easy to share your memories.

Send flowers to the Smith family.