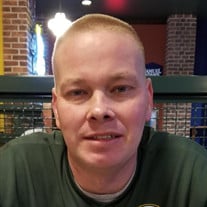 Charles Frederick Hoffman Jr., age 48, of De Pere, WI died Friday, December 25, 2020 at St. Vincent Hospital due to a heart attack. Charles was born December 10, 1972 in Milwaukee, WI to the late Charles Frederick Hoffman Sr. and Cynthia Marie Hoffman. Charles was a mechanic and metal polisher, but was a jack of all trades. There wasn't much he couldn't do. He would help others when they needed help and never once complained. He was very proud of all his children and grandchildren and talked so fondly of them. He was a good cook and baker and enjoyed holidays so he could cook, bake and have family over. Charles was preceded in death by his father, son Jordan and grandparents. He is survived by his brother William (Tracy), sister Christine (Rob) Hoffman, children Jason (Tiffany) Hoffman, Jeremy Hoffman, Britnay Hoffman, Angel Hoffman, Austin Hoffman, Amber Hoffman, Ashley Hoffman and Samantha Hoffman. Grandchildren Alesana Wolf, Zachary Hoffman, Jasper Hoffman. His girlfriend Nichole Mashl, considered children Jordan (Ayrmus) Rogers and Jake Mashl, considered grandchild Elrik Rogers and a host of aunts, uncles, nieces and nephews. Visitation will be Friday, January 15, 2021, from 2-4 pm at Malcore Funeral Home (WEST) 1530 W Mason St, Green Bay, WI. In lieu of flowers, please consider donating for the family's funeral expense to Charles' mother Cynthia Hoffman.

The family of Charles Frederick Hoffman Jr created this Life Tributes page to make it easy to share your memories.

Send flowers to the Hoffman family.