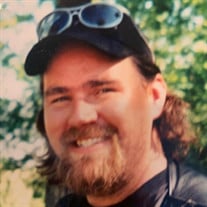 Chad Jason Charles Maus, age 52 of Green Bay passed away on Friday, November 12, 2021 after a month long fight from complications from COVID. Chad was born in Madison on April 20, 1969. He graduated from Green Bay West High School in 1987 and later graduated from NWTC. Chad had a long dedicated career with Conger Toyota Lift as a forklift technician and truck driver. Tammy (Raines) Maus was the love of his life, whom he married on June 4, 2004 at the Brown County Courthouse. Chad had 3 sons and a daughter. Chad's smile and laugh were contagious and he always said "Family first." He enjoyed spending time with his family and friends with a passion for riding his Harleys side by side with Tammy and his Heathens club brothers. Chad's prized possession was a Harley Chopper he built completely by himself. Chad also had a place in his heart for animals, especially his pets, past and present. In Chad's younger years he enjoyed spending time with his cousins, Craig Jensen and Brian Oost, and playing Hockey. Throughout his years he loved listening to music, especially 80's heavy metal, being near water and outdoors, eating Reese's peanut butter cups, and watching the Green Bay Packers. Chad is survived by his mother, Jamie Maus, loving wife and best friend, Tammy, and his children: Brandon Guillett, Winter Griggs (fiance, Joey Lemery), Wayne, Westley, grandchildren: Theseus and Aria and father-in-law, Willard Raines. His siblings: Heather Maus-Ward (fiance Andrew Becker), Carie Lohman (Alan). Chad has a special cousin that was like a sister, Lori (David) Zadrazil. He is also survived by his aunts and uncles: Nicole (Norman) Oost, Joan Horkman, Charles (Barbara) Maus, Diane (Gerald) Canfield, Andrew (Bonnie) Maus. Nieces and nephews: Natalie, Anastasia, Zachary, Jasmine, Kaden, Evelyn, Jade, Teal, and Kaleigh and many very special cousins. He was preceded in death by his father, Darold Maus, grandparents: Omer and Anna Maus and Margaritte and Hilbert Meverden. Uncles: Tyrone Meverden, Donald and Dewane Maus, Donald Horkman, Charles Leurquin, and aunts: Donna Rae Leurquin and Marie Maus. Chad was also preceded in death by some of his club brothers. Close family will join in a private celebration of life service at Calvary Lutheran Church. The Heathens Motorcycle Club will be hosting a celebration at 1:00 p.m. on Saturday, November 20th at The Clubhouse. Expressions of sympathy and condolences may be expressed at www.simplycremationgb.com. In lieu of flowers, memorials may be made in his name to a nonprofit animal rescue organization of your choice. The family would like to thank the staff of Aurora Bay Care Hospital for the care and concern they gave Chad and his family through this month.

Chad Jason Charles Maus, age 52 of Green Bay passed away on Friday, November 12, 2021 after a month long fight from complications from COVID. Chad was born in Madison on April 20, 1969. He graduated from Green Bay West High School in 1987... View Obituary & Service Information

The family of Chad Jason Charles Maus created this Life Tributes page to make it easy to share your memories.

Send flowers to the Maus family.