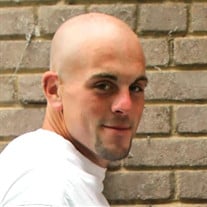 Carl L. Meyers, 30, Menasha, passed away, June 17, 2019, at a local hospital. Born March 15, 1989, in Appleton, he is the son of Cindy (Wichman) Meyers and the late Judson Meyers. Carl is a graduate of Menasha High School, Class of 2007. He married Jessie Miller on Oct. 4, 2013. Carl worked for Delrar for a number of years. Carl is survived by his wife, Jessie; two children, Lennon and Ryker; his mother, Cindy Meyers; one sister, Nicole (Chad) Hamilton and their children, Adam, James, and Finley; one brother, Judd (Megan) Meyers; father-in-law, Don Miller; sister-in-law, Jenny Miller and her daughter, Taylor; his Godparents, Bob and Lynn Schaefer; maternal grandmother, Beverly Wichman; many aunts, uncles, co-workers, other family members and friends. He was preceded in death by his father, Judson Meyers; mother-in-law, Pat Miller; maternal grandfather, Bud Wichman; paternal grandparents, Chet and Dorothy Meyers; and his dog, Tia. A Celebration of Carl’s Life will be held at Christ the Rock Church, W6254 US-10 #114, Menasha, WI, on Saturday, June 22, 2019, from 1-5pm. Carl’s family extends a special thank you to the amazing doctors and nurses at St. Elizabeth’s ICU; they tried to work every miracle they were able. As Carl told his nurse, “I can’t be here, my kids are at home. I need my kids. My kids need me. I have to get to my kids.” Carl’s children meant the world to him and he loved telling everyone about them. “Love you to the moon and back!” Love Lennon and Ryker.

The family of Carl L. Meyers created this Life Tributes page to make it easy to share your memories.

Send flowers to the Meyers family.