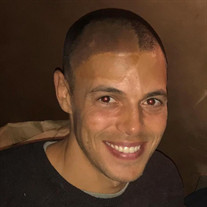 Purpose. It is something we strive for in life. Although Brian Keith Schroeder was taken from this earth way too soon, he made an impact that will last forever by living a purposeful life. With his loving family by his side, Brian Schroeder passed away peacefully on January 27th after a long battle with gliomatosis cerebri; a rarity, like him. He was 39 years old. Brian was born in 1981 to Steve and Denise Schroeder in Waupaca, WI. As a child, he had a love for baseball, hockey, hunting, fishing, camping and any action sports. He attended Ashwaubenon High School and graduated in 1999. After high school, Brian enjoyed putting to work his entrepreneurial spirit and set out to do amazing things. In 2004, he met the love of his life, Mandy (Van Grunsven) Schroeder. Together, with God’s help, they welcomed twin boys, Jaxson and Benett (15), into this world, and although having two premature babies was not an easy situation, the two of them quickly learned they never wanted to go through anything without being by each other‘s side and they were married on October 6, 2006 at Our Lady of Lourdes in DePere, WI. Their vows of “for better or for worse, in sickness and in health, til death do us part” was seen through their unconditional love for one another. They welcomed their third son together, Mason (12), and the three boys were Brian’s greatest joy. He loved watching them grow, but deeply enjoyed teaching them everything he knew which included his love of skateboarding, snowboarding, and living a healthy and meaningful life. His wife, Mandy, was truly his best friend and his greatest fan. She stood by him and helped to make a dream come true for their boys and community, and with the aid of many volunteers and endless hours, Green Bay Action Sports Organization (GBASO) was created. Brian had always felt that our cold climate area needed a place where kids could safely skate or ride at an indoor facility. After its creation, Brian mentored and coached hundreds of children at GBASO. At the time it may have seemed as though he was coaching a kid to drop into a bowl, but he quickly found that it was so much more for both him and his student...he was building up a child’s confidence, and for some, he helped them find a place where they finally felt like they fit in. It was no longer just a building that Brian created. It was a refuge for an entire community and everyone who entered its doors, a place where no one is judged, everyone is both highly encouraged and supported, and every little new trick is celebrated. His energy and spirit still consume the space of GBASO. You can even see his glowing smile on the wall. His GBASO community adored him, and he was so very grateful for all of their support through his years of battling brain cancer. “Function Through Fear” was his motto, and he truly lived it through his final days. Although Brian had a love for many different things in life, we will always feel his presence while fishing at the lake, playing a great game of cribbage, trying a new trick skateboarding, or simply laughing with our loved ones. Brian has taught us all that it is okay to search out our own answers to our questions, and with our newly gained knowledge to formulate our own opinions in all areas of life. He believed in standing up for the things you feel are right, even when it’s not the popular thing to do. The superheroes in our world aren’t wearing capes, but rather they are ordinary people seeking out to do extraordinary things for the greater good. Brian was a superhero in all aspects of life. Brian will be lovingly missed by his wife, Mandy; sons, Jaxson, Benett and Mason; his parents, Steve and Denise Schroeder; his sister, Nicole (Nic) Waerzeggers. He is further survived by his in-laws, Gary and Connie Van Grunsven, Kelly (John) Hermanson, Jenny (Alex) Crabbe, Tom (Rachel) Van Grunsven, many nieces and nephews, as well as an entire community he would consider to be like family. Brian’s family offers their heartfelt gratitude to their many friends and family for supporting them throughout the years of battle. A special thank you to those who helped Brian during his final days; we are eternally grateful. For those following Brian’s story, we will wait for warmer days for an appropriate celebration of life. In lieu of flowers, a memorial fund has been established. Memorials can be sent to PO Box 384, De Pere, WI 54115 or online at gofundme.com/f/brian-schroeder-memorial-fund.

Purpose. It is something we strive for in life. Although Brian Keith Schroeder was taken from this earth way too soon, he made an impact that will last forever by living a purposeful life. With his loving family by his side, Brian Schroeder... View Obituary & Service Information

The family of Brian Schroeder created this Life Tributes page to make it easy to share your memories.

Purpose. It is something we strive for in life. Although Brian...

Send flowers to the Schroeder family.