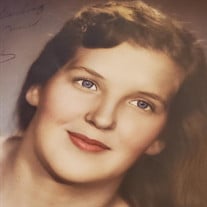 Barbara “Sue” Guyette, age 83 of Green Bay, passed away on Wednesday, April 28, 2021 at Bellin Hospital with family by her side. She was born on August 21, 1937 in Owensboro, KY to the late Wilbur and Clara (Wade) Monroe. Barbara was united in marriage to Bernard Lee Guyette on September 2, 1959 in San Diego, CA. Sue attended Owensboro Technical High School. After she married Bernard, who was a sailor in the U.S. Navy for 20 years, she became a full-time housewife and devoted mother to three children. She was active in her children’s scouting and sporting events and volunteered at their schools. She enjoyed fishing, bowling, crocheting, gardening, and traveling. Sue had a congenial personality and experienced many enduring friendships over the years, some with whom she had kept in close contact for more than 50 years. Left to cherish Sue’s memory are her three children, Billy (Robyn) Guyette, Anthony Lee (significant other Vanessa Osim) Guyette and Linda (Jerry) Anderson; eight grandchildren, three of which carry on her middle name Sue; four great grandchildren and one great great grandson. She is further survived by a niece and nephew. Sue was preceded in death by her parents; husband, Bernard Lee; and siblings, James “Bud” Monroe, Wilbur Monroe, Jr., and Mary Ellen Miles; and one infant brother Donald Monroe. The family wishes to especially thank Robyn Guyette for her many years of dedicated and loving service to the well-being of Sue during her final years, and to also express appreciation and gratitude to the many longtime close neighbors at Bay Manor in Green Bay who provided her with enduring supportive and meaningful companionship.

The family of Barbara Sue Guyette created this Life Tributes page to make it easy to share your memories.

Send flowers to the Guyette family.