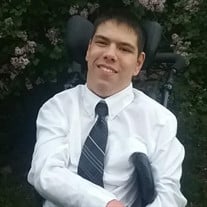 Austin Schrimpf was taken into the arms of Jesus to his heavenly home on April 27th, 2020. He was born to his mom Sonya and dad Tim on October 11th, 1999. Austin had Cerebral Palsy from birth and despite his disability of being totally dependent and non-verbal, he experienced so much of life. He loved trucks - the faster and louder, the better. He'd often point to any he saw, his indication that "Let's take that one for a ride". Riding on four-wheelers and snowmobiles was just as exciting but his preference was to drive them. (With grandpa's help of course.) Austin was a social person and loved gatherings which we always referred to as "parties". He loved having people around. He attended West High and the CP Center in Green Bay and couldn't wait for the bus to arrive in the morning. He enjoyed his many miles of walks with grandma around the streets of Green Bay and the many sites they'd encounter. His choice was to be outside in any weather even if it was a blizzard. Austin's love for his grandma Gale was something special. And her's for him. They had a bond that spoke volumes. In his downtime, he enjoyed laying in bed watching his many videos of trucks and people doing silly things as in Mighty Machines, Hard Hat Harry, All About, There Goes & Mr. Henry. He also loved his arm wrestling matches with grandpa. He was always the champion. A highlight for Austin was flying in an airplane to New York City thru the Make A Wish. He was thrilled with the hustle & bustle of the big city & all of the excitement he experienced while there. Another highlight was the 5k races he had started to participate running in with the help of his cousins Dan and Melenie Challe for My Team Triumph. His last race, he and Dan came in 1st place for My Team Triumph. The most memorable thing about Austin was his infectious smile and laugh - he loved life! He touched so many lives in his short time on earth. He inspired people in different ways and he accomplished that without the privelege of being able to even say a word. Then God said, "Well done Austin, time to come home now." Austin is survived by his mom Sonya McLain-Tenor & step-dad Jesse Tenor, his dad & step-mom Tim & Jackie Schrimpf, his brother & sister Broc & Kylia McLain, his step-brothers Isaac & Skylier Cogswell, grandparents Gale & Pat Hall, Jim & Donna McLain, Cathy Wilde and many aunts, uncles & cousins. He was preceeded in death by his grandfathers Tom Kieffer & Bruce Wilde, great-grandparents Bud & Mary McLain, Marion Schrimpf and Isaac Pete. The family wishes to acknowledge Austin's teachers & caregivers throughout his school years as well as the CP Center for making his days exciting, his care team, especially Emily Meyer & Sue Hubanks, at American Family Children's Hospital in Madison, and his amazing personal caregiver Melissa Schiltz. Some charities people can donate to in Austin's memory are The Ronald McDonald House Charities, Make A Wish Foundation and My Team Triumph. Due to the current social distancing the family will hold a memorial service & celebration of life at a later date.

Austin Schrimpf was taken into the arms of Jesus to his heavenly home on April 27th, 2020. He was born to his mom Sonya and dad Tim on October 11th, 1999. Austin had Cerebral Palsy from birth and despite his disability of being totally dependent... View Obituary & Service Information

The family of Austin Schrimpf created this Life Tributes page to make it easy to share your memories.

Austin Schrimpf was taken into the arms of Jesus to his heavenly...

Send flowers to the Schrimpf family.