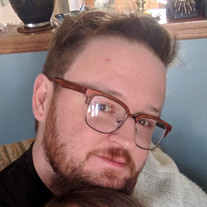 Andrew Kaster, age 31, passed away peacefully on May 4th, 2019, with family by his side. Andy was born in Green Bay on July 20th, 1987 to Sue Popp and Paul Kaster. Andy made an impression early on in life through his love of artwork, movies, and music. With a penchant for all things science fiction and macabre, Andy found joy in Star Wars, the Alien series, H.R. Giger, and various other artists and works. While attending Ashwaubenon High School, he spent countless hours making movies and skits with Rob’s Basement. Andy and the other Rob’s Basement boys made everyone around them laugh at talent shows and movie nights with an endless supply of jokes, junior bacon cheese burgers, root beer kegs, and punch and pie. Andy enjoyed spending time scaring people as part of the Terror on the Fox family. With his passion for acting and love of the dramatic, he made fierce friendships and a brutal brotherhood that would last a lifetime. He wasn’t afraid to go all out and put every part of himself into every character he imagined and took pride in making terrifying sounds. Andy shared his artwork with the world both through his drawings and as a tattoo artist. He apprenticed, and later worked, at Titletown Ink. He was always his own biggest critic and valued his time spent there among his mentors and peers. In February 2009, he welcomed his first daughter, Dahlia, into the world with Noelle McSorley-Kaster. He and Noelle wed in July of the same year, on his birthday (fondly referred to as his birthaversary). He adored being a father and he and Noelle quickly grew their family to include two more daughters, Leela and Frankie. He instilled in his children a sense of wonder in the world and loved to teach them about science, nature, and the universe all while passing along his witty sense of humor and special knack for pranks. He carried the same attitude into his relationship with his niece and nephew, whom he loved to spend time with. Andy saw the world a bit differently and, luckily for us, he was able to show us what he saw through his wit, his art, and his giant heart. Everyone who knew Andy knew a different part of him; he was a father, a husband, a son, a brother, a friend, a co-worker, an artist, an actor, a jokester, and probably a bit of a nerd. But no matter how someone met Andy, his passion and his attitude easily made a lasting impression on everyone. His force will always be with us and he is fiercely missed. Andy is survived by his parents Sue Popp and Paul Kaster, wife Noelle McSorley-Kaster, three children Dahlia, Leela, and Frankie, brother Adam (Samantha) Kaster, niece Macey, nephew Liam, and many aunts, uncles, cousins, and friends he considered family. He was preceded in death by his maternal grandparents David and Jean Popp and paternal grandparents Joe and Jeanne Kaster.

Andrew Kaster, age 31, passed away peacefully on May 4th, 2019, with family by his side. Andy was born in Green Bay on July 20th, 1987 to Sue Popp and Paul Kaster. Andy made an impression early on in life through his love of artwork, movies,... View Obituary & Service Information

The family of Andrew Kaster created this Life Tributes page to make it easy to share your memories.

Send flowers to the Kaster family.